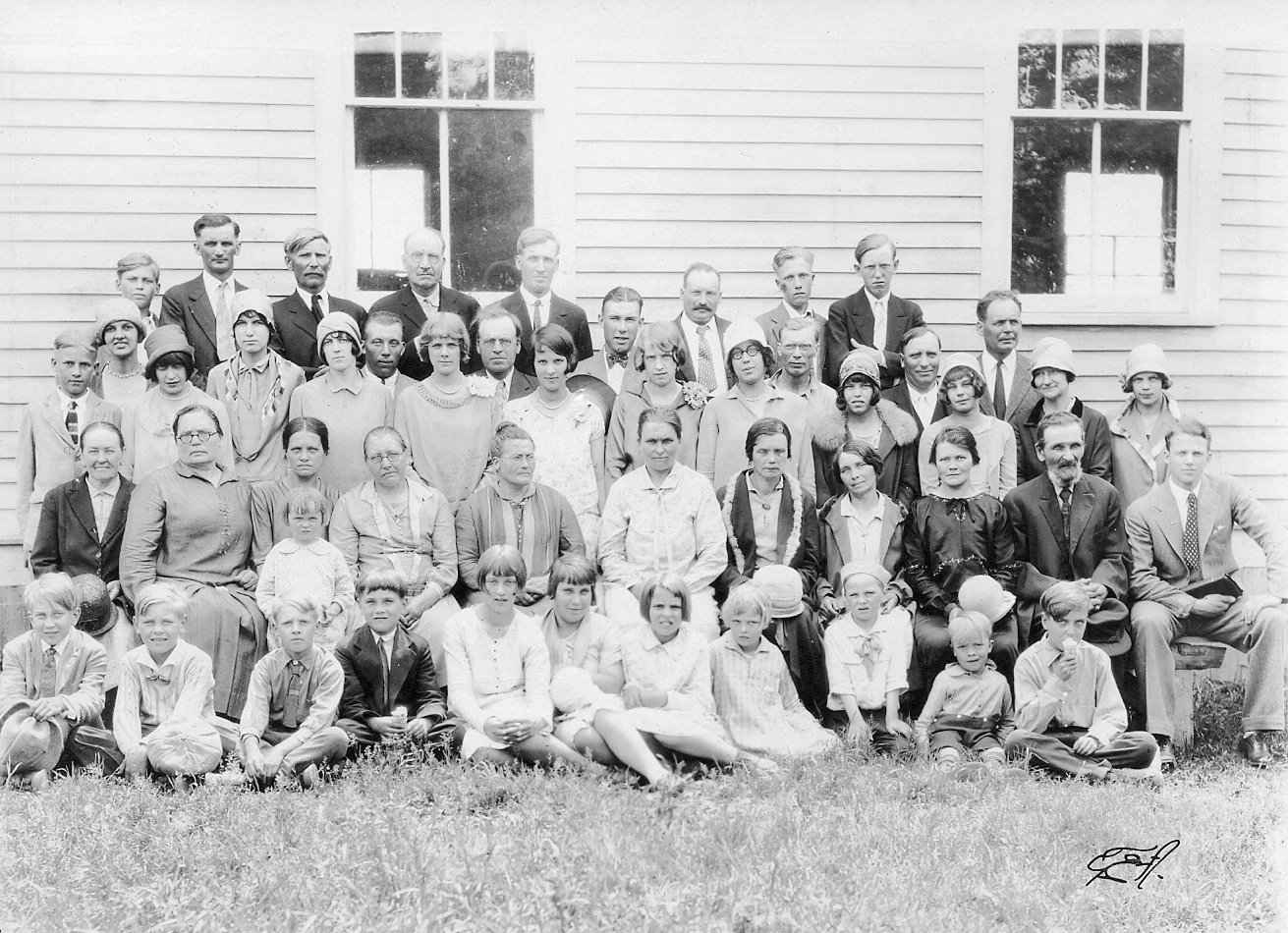 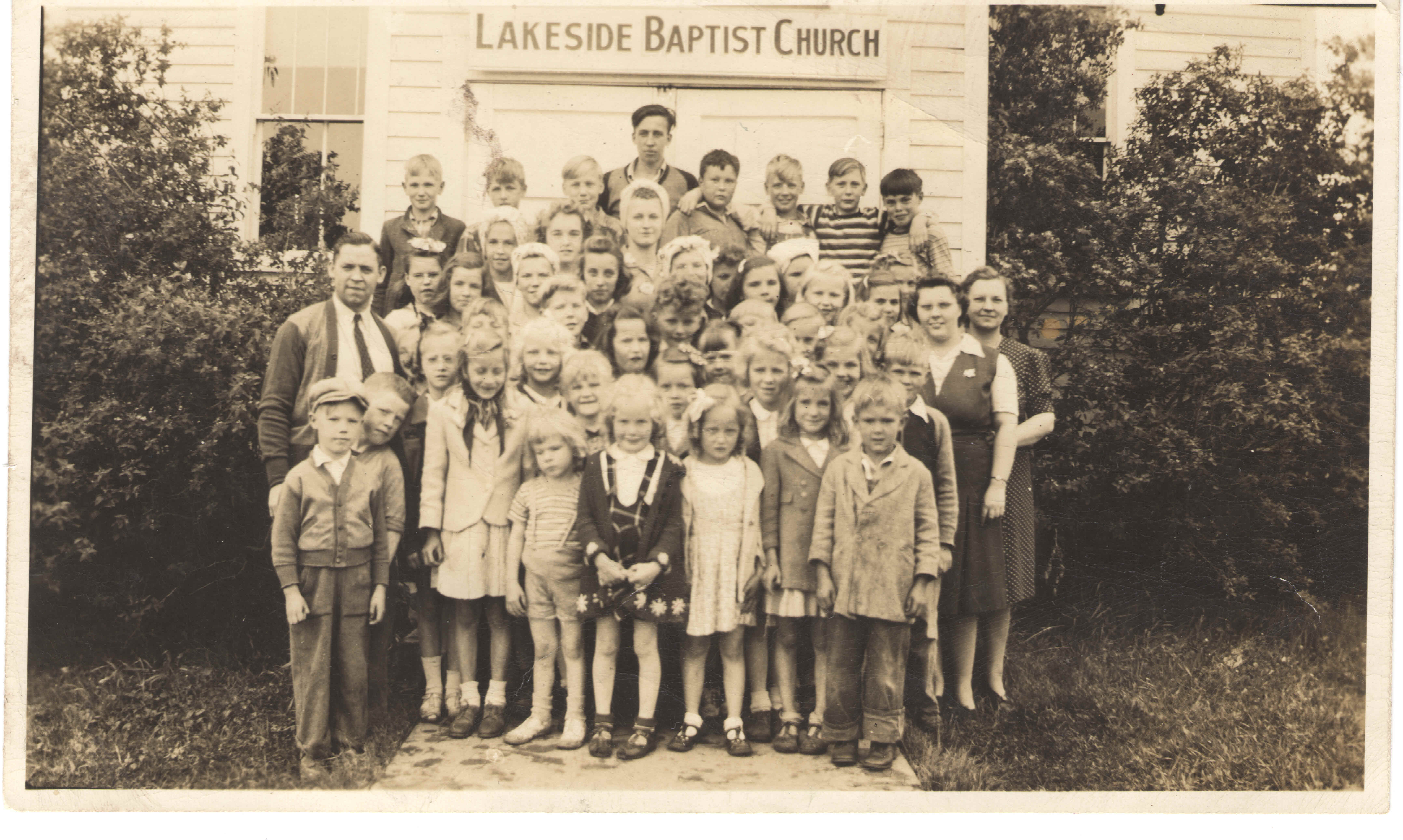 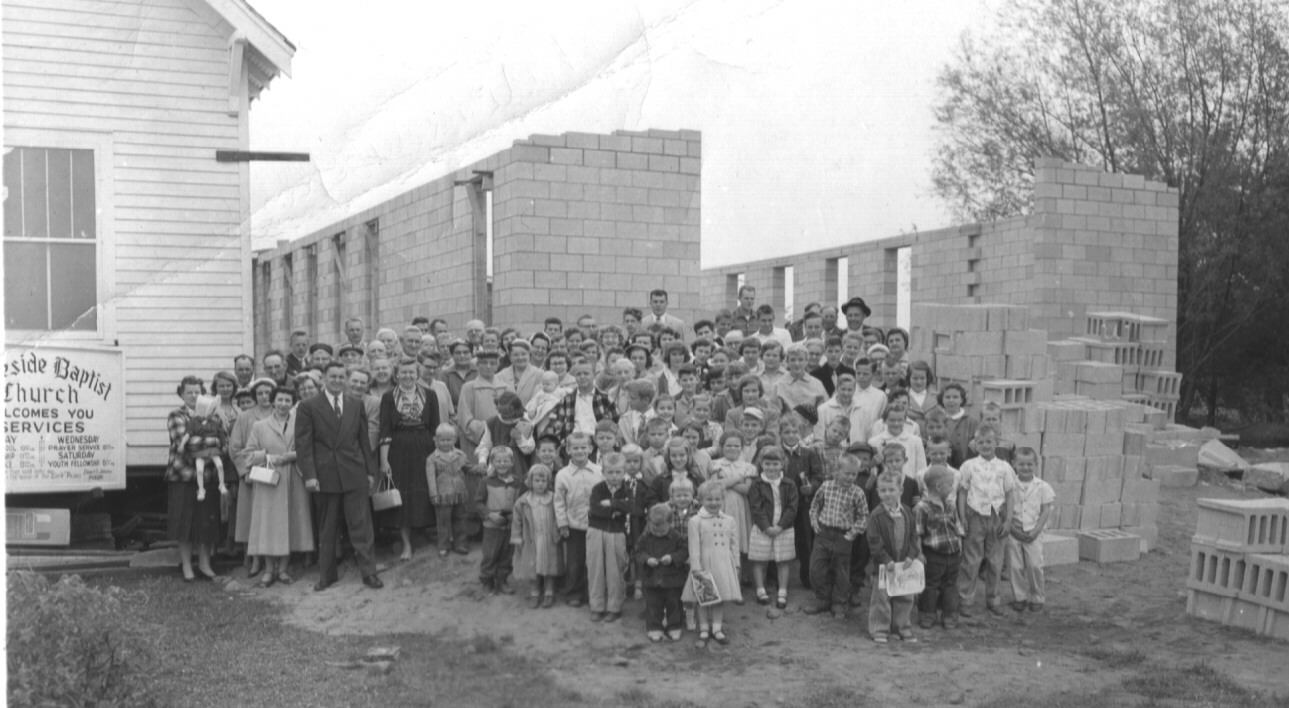 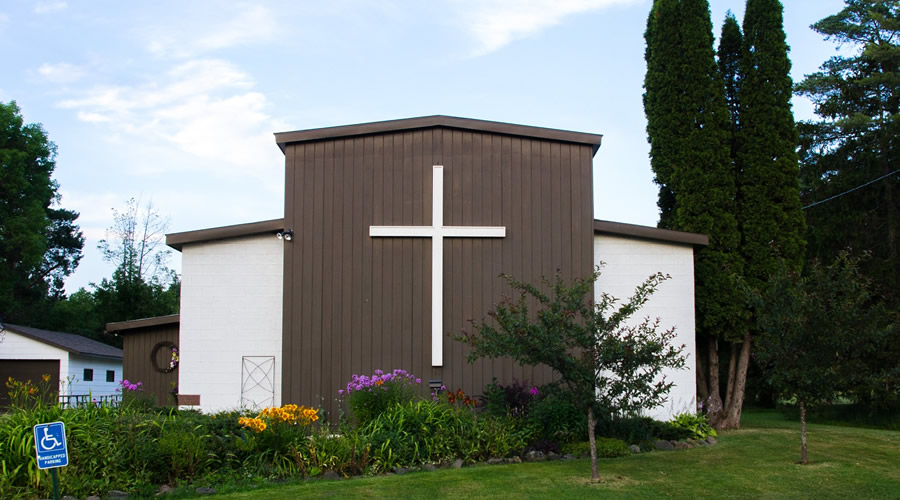 History of the Lakeside Baptist Church

The actual beginning of the work at the Lakeside Baptist Church must be traced back to about 1905 when Mr. Axel Dahlin began conducting Sunday School and worship services in a school house on Sunday afternoons. Occasionally, ministers would travel to our community and hold services. Missionary Andrew Bloomquist can probably be given credit for holding most of these services which became the foundation for the organization of Lakeside Baptist Church.

On January 9, 1916 the first plans were laid for the Women's Missionary Society by four women of the community. The name of the group was to be "Myran", translated Ants and referring no doubt to the industry of these ladies. This, in the years that followed, proved to be an appropriate name. The stated goal of the society was: "We are to be missionaries at home.  Every member was a missionary.  Officers were: Mrs. Albert (Ina) Esselstrom, who was to hold office for 25 years; Vice-President, Mrs. Gust (Ida) Runquist; Secretary, Mrs. August (Elizabeth) Wick; Vice-Secretary, Mrs. Alfred (Elin) Swenson; and Treasurer, Mrs. Alfred (Mary) Esselstrom. Interesting to note was the fact that lunch would be ten cents per plate, children free. A hostess could bring only three kinds of baked goods to the meeting or be fined fifty-cents. The women's group was destined to play a large part in the organizing of the church. In 1918 it is noted that a gift of $25.00 was given towards the erection of a church building.

Plans for building of a church began in 1918 but half way through construction, the building was blown down in a wind storm. Undaunted, they began to rebuild the church. The records of the women's society show a contribution of $328.00 to the building project in 1921. Income for 1921 was $668.68 with a building debt at the end of the year of $233.00.

In 1923, three more member were added to the church. 1924 was a great year for the church. At this time Miss Ellen Mattson of Kelsey, Minnesota conducted a Bible School at the church. She then contacted Rev. J. Lloyd Hunter of the American Sunday School Union and proposed a series of gospel meetings to be held in the church. God was pleased to work in many hearts and as a result twenty-five accepted Christ as Savior. The meetings ended on a Sunday when the Lakeside people gathered early in the afternoon on the banks of the Middle River. Rev. Hunter preached, after which they grouped themselves together and sang gospel hymns while the candidates were baptized.

In 1926, Mr. Herman Mattson came to be the pastor of the church. The back room of the church was partitioned to make living quarters for him. Before his coming, services were primarily in the Swedish language, but Pastor Mattson, preaching in English, was able to draw folk from the whole area and as a result, the services were well attended and souls were won to faith in Christ.

In 1928, Mr I Cedric Peterson was called to pastor the church and continued to serve until January of 1929. This was a good year. Church books show that twenty-seven member were added to the church from July 12 to August 12 of 1928.

In the years that followed, pastors were usually called for the summer months. Travel was difficult in winter and services were held on Sunday afternoons with either lay people or itinerant ministers preaching. Mr. Felix Esselstrom throughout all these years was very responsible to the church work, seeing that the pastors were available and at times presiding himself at services and serving as church organist.

In the summer of 1929, Mr. Eric Sjolund was called to be our pastor. That winter Rev. Lundgren, pastor of the Ogden Avenue Baptist Church in Superior, Wisconsin and Mr. Henry Peters from Superior, alternated in coming out to hold Sunday services. The summer of 1930 saw Henry Hartberg as pastor and Miss Ida Erickson, who later became a missionary to Aftica, as the speaker at the winter services. Mr. Alvin Reuhmann pastored the church at the winter services. Mr. Alvin Reuhmann pastored the church during the summer of 1931 while Albert Esselstrom spoke during the winter months. The summer of 1932 Rev. R Applequist conducted the Sunday services and Miss Ida Erickson held the vacation bible school. That fall Rev. Carl Wicklund was called to pastor the work of the church, also serving the Oulu and Lake Nebagamon Baptist Churches. He continued this work until the spring of 1934.

At a business meeting on August 7, 1935, a motion was carried to start a fund for the building of a parsonage. On October 13, 1940 the church voted to begin building a parsonage, feeling that a full-time pastor was the answer to the needs of the church and community. It was through the foresight and endeavors of Mr. Matt Strom that this parsonage became a reality.

In the fall of 1941, Rev. Frank May accepted the call to become the first full-time pastor of the church. During his ministry, the parsonage was completed as well as a two-stall garage. Hopes were voiced then for the purchase of a bus to transport Sunday School children. May 28, 1944 was a great day in the history of the congregation as the parsonage dedication was held, and the mortgage burned. In 1945 a fund was begun with the view of enlarging the Sunday School facilities by building a basement under the church.

Rev. Hartley Osterlund came to pastor the church on June 7, 1946. He served the Oulu baptist Church also, and this continued until August 31, 1952.

In the fall of 1952 a new oil-fired furnace was installed in the church. In December of that year, Emmett Johnson, a student from Bethel Seminary in St. Paul, accepted the call to the church. While still attending seminary, Pastor and Mrs. Johnson drove to Lakeside each weekend for the services, and in June, 1953, upon graduation, moved into the parsonage. The first major project at this time was to have a well dug for the parsonage and the church. My 1954 the church attendance doubled and more space was needed for Bible School and youth activities. In March of 1954, plans were drawn for a Fellowship Center, also to be used as an educational unit. Along with this, plans were made for the building of a future sanctuary. With contributions of labor, material, and funds from members and friends, and with a loan of $3,000 from the Wickstrom Fund of the Mission Union, an educational building was completed by and dedicated on October 8th and 9th of 1955. In 1956 a large bus was purchased for use in the Sunday School and summer Bible Camp programs.

The date when a sanctuary would adjoin the newly constructed fellowship center seemed a remote possibility, However, by late 1956 it became apparent that the old church had served the purpose and plans were set forth to complete the new church at once. Plans were drawn for a 32 by 65 foot building to be constructed of cement block in a modern, functional style. A loan of $3,200 was procured for the Wickstrom Fund of the Mission Union.

On June 16, 1957 the cornerstone was laid. The most unique feature of this building was that it was done almost entirely by the members and friends of the church. The women, along with the men, took part in every phase of its construction. This included the logging and piling of the lumber, to more technical stages involved in the building code.

Twenty-one members were welcomed into the church in 1957.  A total of forty-five since the fall of 1952. Rev. Emmet Johnson served until December of 1957.

In March of 1958 the church sanctuary was completed and on March 16th was dedicated to the Lord.

In February of 1958 Rev. Clifford Home began his pastorate with Lakeside and had a very fruitful ministry serving until March 26, 1961. Rev. John Yonkers , a graduate of Bethel Seminary became our pastor in May of 1961. During his ministry, on October 2, 1963, the church burned the mortgage on the sanctuary loan. On January 17, 1964 the church decided to start laying plans for additional Sunday School rooms as our Fellowship Center did not prove adequate for all necessary classes. On March 4, 1964 building began with the first concrete poured on April 18th. The new addition was finally put into service in June of 1965. John Yonkers served until August of 1965 and Rev. J.J. Oberg became our interim pastor.

With the buildings and facilities finally completed at Lakeside, the church, its members and pastors have continued to serve the Lord in Lakeside for another five decades.

Our church has had the joy of seeing many of its former members going into the pastorate or into other full-time Christian service. These include Dr. Felix Runquist, Rev. Edgar Berglund, Rev. Nathan Esselstrom, Mrs. Charles Motley (Edna Berglund), Mrs. Paul Evan (Elaine Johnson), Mrs. Dan Porch (Laurie Staurseth), Brad Staurseth, and Dr. Larry Smith. Many others are serving the Lord faithfully as teachers, part-time Christian Education workers, and ministry volunteers. We can now look back and see the evidence of God's work at Lakeside and with praise and thanksgiving give Him the glory for what He has done.